The Steel Fabricator Certification scheme (SFC) is a programme to ensure participating steel fabricators manufacture product of the highest quality.

An important objective of the SFC is to provide procurers and specifiers with not only certainty of product quality, but that they are dealing with a fabricator who employs personnel and procedures that represent international best-practice.

The SFC comprises four construction categories, from CC1 to CC4. The categories represent the level of risk associated with the project, one being the lowest and four the highest. D&H Steel will be the first fabricator to complete the SFC scheme to construction category CC3, which covers high-risk public projects such as stadia, medical facilities, schools and high-rise buildings. Director and general manager Wayne Carson (WC) talks about the experience.

The SFC scheme is a crucial step for us to tangibly demonstrate the superiority of our product compared to low-quality imported product. We’re hugely supportive of our New Zealand industry working together to achieve this high standard of differentiation.

SFC: What is the relationship between ISO 3834 and SFC?
WC:

ISO 3834 is a substantial subset of SFC. It is a pre-requisite and a natural starting point on the path to certification. ISO 3834 only applies to welding operations but, as a matter of course, you must consider all associated activities both preceding and following the welding process, because quality is not readily verified after the fact.
Importantly, ISO 3834 is a recognised international standard. By targeting ISO 3834 from the outset, the SFC scheme is a comprehensive, world-class quality assurance initiative.

SFC: How would you describe the ISO 3834 part of the SFC process?
WC:

ISO 3834 is a rigorous standard; it’s necessarily extremely detailed. As a result, our journey to full certification was more onerous and more time-consuming than we expected — it probably took us six months from start to finish. And, to be successful, everyone’s input is required so you do need to allow staff to commit time to it.
That said, once you’ve completed the ISO 3834 portion of the exercise, you’re over two-thirds of the way to reaching SFC and the whole team feels an immense sense of achievement.

SFC: How important is teamwork to the process?
WC:

Implementing ISO 3834 was a massive team effort for us, involving everyone from supervisors and operators to admin and management. In simple terms, ISO 3834 is about defining processes and individual responsibilities, so the process requires everyone’s buy in. There is a spider web of things to address so it was crucial to have the support of the entire team to give each strand of activity the required focus.

SFC: What have been the benefits of ISO 3834 to your business?
WC:

It’s been a very positive experience for us. We’ve always been proud of the quality of our work and we’ve always had a good culture, but both have been enhanced following this intensive team experience.
And now that we’ve arrived, there are significantly lower stress levels for the whole team; there are crystal clear lines of responsibility so there are simply no surprises.
An unexpected benefit to our operation has been the increased efficiency, for example, we’ve significantly reduced rework. Our complete management and quality systems have been improved.

SFC: What has been the single best improvement to date?
WC:

We have implemented a rigorous pre-start process, which we’ve dubbed our 3834 Pre-construction Agenda. It’s a job-specific checklist that we circulate to the entire team, one by one, at the start of a job. Everyone fills in what they know and passes it on to the next link in the chain. Once this living document is 80 percent complete, all stakeholders meet and any potential issues are flushed out and addressed at the outset.

SFC: What advice do you have for steel fabricators considering SFC?
WC:

First, include all your key people in the process, from day one. The entire team needs to be clear about the objectives – their input and support is vital to achieving them.
Second, set milestones along the way, and celebrate them!
Last, but not least, don’t be put off! Most good fabricators will be close to half way already. It’s just a matter of tying everything together beneath one umbrella. 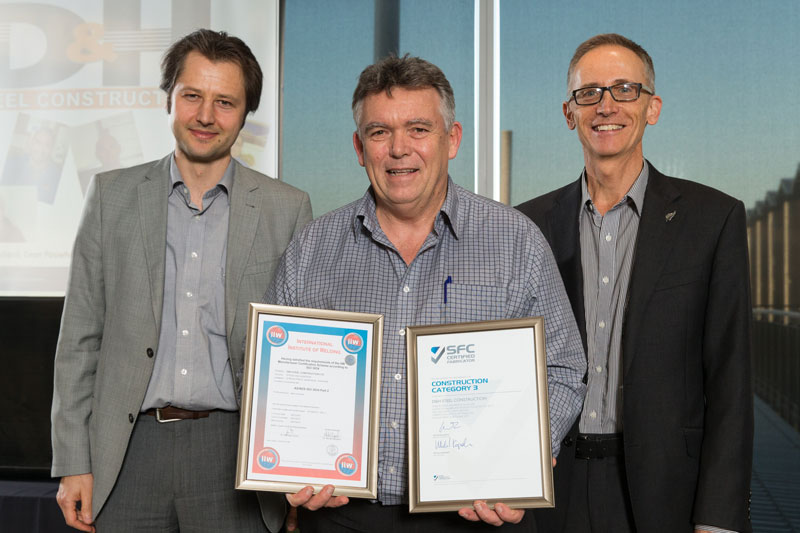